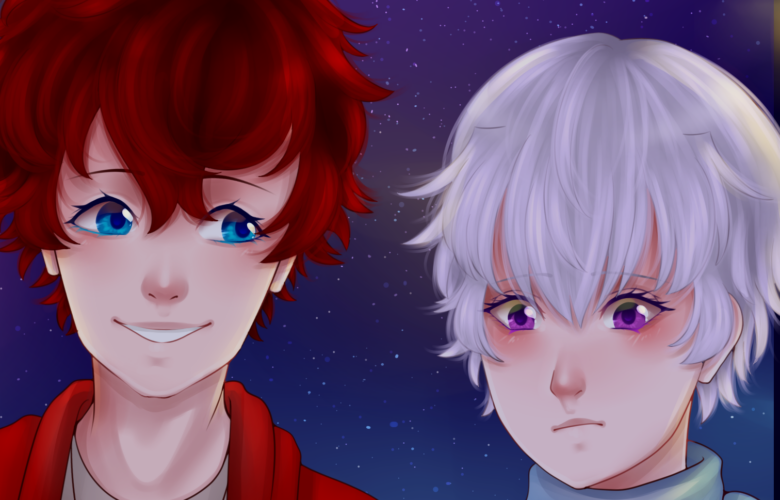 Everyone knows that 2020 has been an eventful, devastating year for all of us—Including us at Crystal Game Works. Despite all the difficulties, we’re proud of what we’ve managed to do this year.

Our most ambitious game jam entry yet: Enamored Risks was released in 2020. With three routes, over 50,000 words, and 30+ volunteers, working on it was an adventure to behold.

The pandemic hit during the Nanoreno period, throwing everything into chaos. However, thanks to the unrelenting dedication of our team, we managed to pull together and get it done.

Another game we released is a side story set after the events of Asterism’s true end. It’s a short, cute story about Kotachi taking Ophi to a museum and includes a pair of space penguins (on Foleso’s request). It was created in a week for the Shoot for the Stars Jam and Yaoi Jam 2020.

Another exciting development was the release of the Drops of Death demo. It’s an ambitious murder mystery game where the killer is determined randomly at the beginning of every play through.

The Witch in the Forest Remaster

Although The Witch in the Forest was released in 2017, in 2020 we released it on Steam with improvements to the GUI and art, and a major update to the artbook to include more content and a revamped design.

In addition to our main releases, we’ve done quite a few more things.

We’d like to finally end this pretty long devlog about our accomplishments in 2020 with the most important message of all: A huge thank you. Without fans like you, none of this would’ve been possible, and we’re looking forward to making more amazing things for you in 2021.

Now, a short message from both of us…

Foleso: Finally 2020 is over and done with! There are some pretty cool things in store for 2021 from us, so keep your eyes peeled 👀

Miko: We made it through somehow! I hope all of you are staying safe—we’ll have a new VN to keep you occupied after March! I know the change of the calendar doesn’t actually mean much, but it’s the mindset that’s important—it’s the thought that “I will change and do better” that’s the point. Thank you guys for being with us through this year, and I hope you’ll keep moving forward with us into the next year!

Have a very happy new year! 🎉