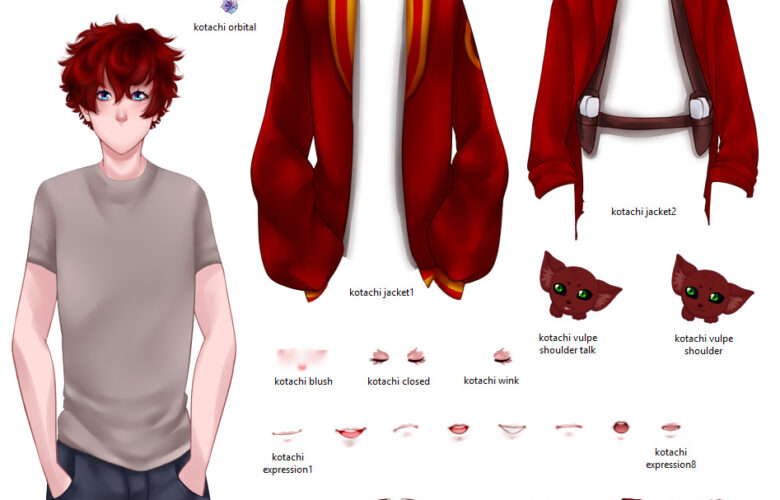 Every visual novel relies heavily on the graphics, with no other asset being the most used than sprites. Visual novel sprites are the backbone of most visual novel graphics- they help us see the cast and how they react to situations. But depending on the project, the sprites need to be set up differently! Today we’re going to look at how we set up our visual novel sprites in 4 different projects.

Note: we use Ren’Py for our projects! There are also several different ways to go about making sprites- the code shown here isn’t the only way to do so.

The Witch in the Forest

For the original The Witch in the Forest we had the sprites as a single image- every expression was a separate, complete image.

Once we later added additional poses, the 2nd and 3rd poses became files 2 and 3. Some expressions only had one pose. Because each sprite is a separate image (with the starting tag of the character name), the image had to be shown in line each time.

This method of making sprites- where every expression is a complete image- is easiest but has several downsides:

The file size wasn’t a big problem for The Witch in the Forest due to how few characters are in the project, but for other projects this should be kept in mind.

However, for the Steam port of The Witch in the Forest we used the modern LayeredImage feature.

This new sprite set up allowed for more combinations and a smaller file size! The Steam version is right under 60 MB while the original is over 100 MB.

You may be wondering “what are LayeredImage sprites?”. We’ll take a look at them in just a bit. For now, let’s look at an older iteration of them- LiveComposite sprites.

That Which Binds Us

Our first commercial visual novel, That Which Binds Us, used an older method of sprite setup called LiveComposite.

LiveComposite (and LayeredImages) require the sprite to be in layers. The layers are up to you, depending on what you want to change, but the basic setup is having a base image, additional outfits as other images, and expressions as other images.

LiveComposite sprites are smaller to set up but more finicky. They use variables to switch the images shown.

Because Eva’s first base was her normal outfit, we had to make the first outfit a transparent image.

Whenever we wanted to change how they were posed or looked, we had to change the variables. This wasn’t very fun to script and caused the line count on our .rpy files to become very long. Thankfully, Ren’Py now has a much easier solution called LayeredImages…

Asterism‘s sprites were put together with the LayeredImage system. Here’s the layout for Kotachi’s sprite.

As you can see, we have Kotachi’s base as well as various things to lay on top of it such as his jackets and expressions. We separated his eyebrows from his mouths to give us even more combinations for his face.

For some of the parts like his Orbital and jackets we used variables as those change less frequently. Once Kotachi gains the Orbital, he has it for the rest of the game, so it’s easier to set a variable for it than to remember to show it every time his sprite is shown after that.

There are other ways to go about setting up LayeredImage code, so please consult the Ren’Py documents if you’re considering setting one up yourself!

Using LayeredImages allows for us to change the expressions and such inline while a character is talking, like so.

This is because the character speaking tags also have what image to associate with them.

For Drops of Death we went with fullbody sprites to allow for more positioning around the screen. The visual novel sprites in DoD still use the LayeredImage system in Ren’Py.

As you can see here, Natasha is further in the background than would normally be possible with halfbody sprites.

Every love interest has a winter coat, so they all have:

In the future they’ll have additional eye positions as well, but this is what the sprite set up looks like for now. You might also notice how the naming scheme looks like the one used for Kotachi’s sprite. Using the same naming scheme makes it easier to remember. Typically, expression1 = smile, expression2 = talk, expression3 = frown, expression4 = frowntalk (neutral talk).

We hope this overview of how we set up our sprites in Ren’Py was informative!