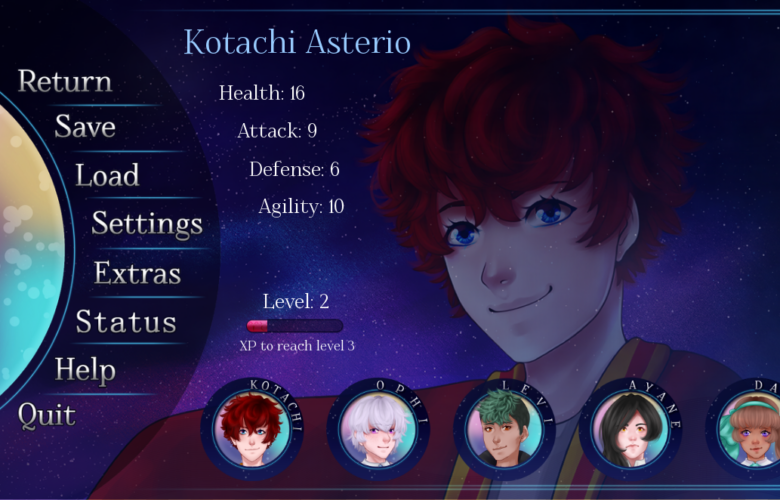 A lot of progress has gone on this week in Asterism! If you’d like to see a “live” version of devlogs where you see progress as it happens, you can join our Discord server.

First thing we’ll look at is the Weapon Enhancement screen! One of the features that was planned from the start was having weapons scattered in dungeons that the player can pick up and use to enhance their own weapons through Riko. Because you talk to her before each of your missions, she’s the “items keeper” of sorts.

You’ll start by selecting who’s stats you want to increase.

When you pick an item she’ll tell you a bit about the constellation or star as well as what stats the weapon will increase.

Before we move on to the leveling system, let’s take a look at some progress shots of the weapon enhancement screen. At first it was going to look more like this.

You would pick from a character headshot in the middle column, pick a weapon in the big grid, and then go to Riko’s textbox to confirm the enhancement.

Once we got to this screen though it became clear that this was was obtuse and could be clearer for players, so we changed it up. We redid this screen so it’s easier to understand- you’ll select a character and then go to the enhancement screen.

After we got here the direction forward was clear!

Next is the leveling system. After every fight your team members (that are left standing) will gain experience which is different every time. Because of the leveling system, we had to implement a status screen for inbetween battles.

This was a very old concept sketch of what a possible status screen might look like. The concept was always to have the main artwork of the character beside their stats. Here’s a series of progress shots on this menu.

And finally we have the current version!

With these updates the demo will be updated very soon! Thank you guys so much for your patience on Asterism.