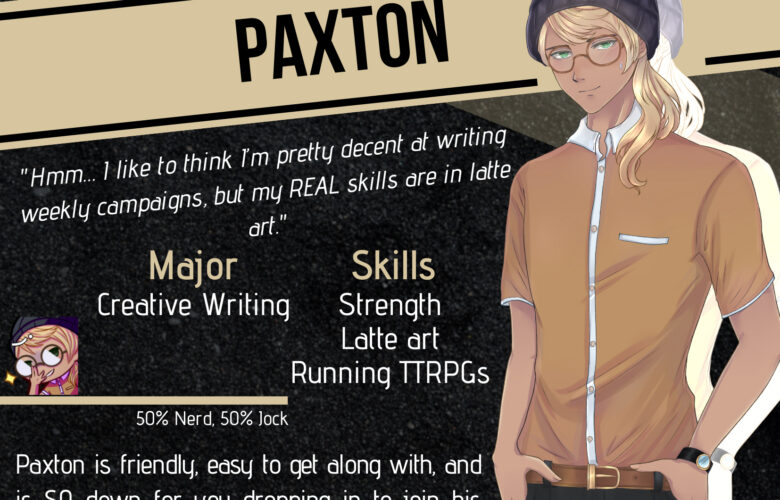 Hello everyone! This is to explain how my work as a Love Interest route writer for NaNoRenO 2020 mostly proceeds, so here we go!

The outline is the starting point of everything. It’s mostly, and at certain parts vaguely, being prepared by Tabby, who is the person that’s handling the writing side of this game and doing a great job with it! But LI routes are the route writers’ responsibilities, so that’s where I step in.

After going through the draft that was given to me, I add and take out details and conversations. If there’s a need, I can also write a new scene, but it happens rarely.

The actual point of this step is not writing everything, but instead, putting down the plot points that are necessary for the route. Checking the outline is the first step of writing anything for this project.

References are a must for writing. For example, the LI I’m writing, Paxton, is a barista and a D&D lover. I’m also a D&D fan, so there’s not much I need references about when I’m writing about it, but what being a barista brings is a mystery for me.

Thankfully, Tabby has worked as a barista and I can always ask my questions to her and get a good answer from her experiences. Urbex, being a barista, D&D, and more- it all requires me to look up things that I need to know to write Paxton’s route. Finding a good source, double-checking the information to make sure it’s not fake, and then adding the details I learnt to the outline is all this step’s about.

This one is fairly obvious, I think. The LIs need to be in character when they’re talking, the conversation shouldn’t make the reader think ‘That’s not something LI would say!’ and let the story flow as it was intended to. I have to admit that it’s pretty fun to write this part, thinking about all the reactions the LIs might have and all. This is also the part where I add Paxton complaining about his D&D sessions spiralling out of control.

Sounds fun, doesn’t it? The hardest thing in this step would be showing emotions the characters feel in certain scenes by using the right words. For example, getting the right tone for the tense moments that include Paxton’s interactions with Finn, another LI that has a bad record for keeping himself safe, is pretty hard to get done in one go.

Though, the sweetest things also come to life here. Paxton’s extrovert personality comes to life with his embarrassed but flirty comments, and the way he sometimes teases Alex, the MC, is one of the best things of his route!

Now, all these steps are a part of writing, yes. But this ‘actual writing’ step includes taking out all unnecessary details, headcanons you thought of but couldn’t include to the scenes, information that you looked up but ended up not managing to add to the actual story, to make the story come to life. It’s also all about rewriting sentences, having an existential crisis over plot holes, and suffering over the characters’ actions! But also, I get to explore the way Paxton uses Alex, the MC, as his guinea pig for his latte experiments- which is very fun, so it’s actually not as bad as I make it sound.

In my experience, seeing the results is more than worth the trouble. The end of this step will probably never come until the game is officially done and out- there will always be more that a writer can add to the story, after all. But as frustrating this part can be, it’s just as hard to get sick of. You’ve got yourself an ore, now you’ve gotta polish it and turn it into the gem that you know it is!

Well, that’s about it. I hope you enjoy all we’ll come up with for this game! Thank you for reading!