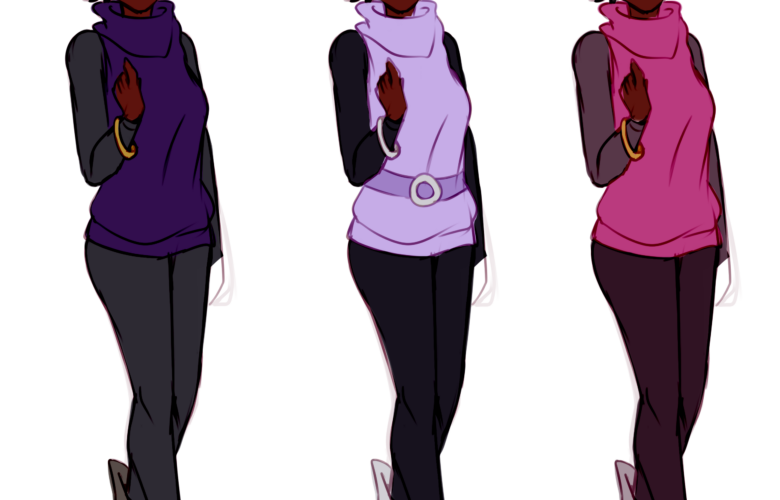 We’re back again with another concept devlog! This week we’re looking out how Natasha, the 2nd love interest in Drops of Death, came to be.

Natasha is the ex-teammate of 3 of the victims, as she used to be on the swim team but quit a month prior to the start of the game. She’s quiet and keeps to herself but isn’t abrasive on purpose- she can be curt but typically only speaks when she has something to say. As her older brother is a football player, she comes from a family of athletes. As the murder victims were always going to be swimmers, Natasha was always set to be a swimmer as well.

The game is set in winter, so I wanted her to have a fashionable sweater. The two main ideas for designing Natasha were “modern” and “fashionable”.

Long shirt + leggings + boots are pretty stylish, so perfect for her. We decided on the first outfit but with a top to go under it as well.

After that came the color tests- Edwin already had blue so I tried purples and pinks. I also added some accessories to her for an extra bit of glam.

Of course, we decided on the first color combo plus a belt. After that I designed her winter jacket- a cute petticoat with a puffy scarf.

Designing her pose was rather easy too- something modest and slightly standoffish but confident.

That’s it for Natasha’s design!