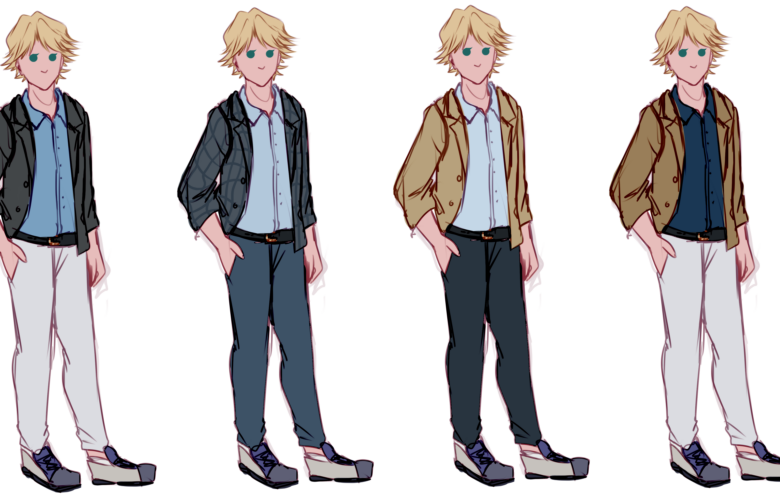 This week I’ll be going over Edwin’s character design! He’s the “main” love interest of Drops of Death and is Adrien’s fellow classmate in the business school. I wanted him to be a few things- conniving, self-centered towards his own goals, and rich but with a heart of gold. In essence, he’s a rich ambitious man who’s hopelessly in love with Adrien. With these attributes in mind, it was clear where he should be on campus.

I worked in the business school on my campus (specifically in the entrepreneurship program) my senior year, so I tried to give Edwin clothes I would expect to see from students there. One thing I kept in mind was the time of year. While a lot of guys at my school wear short-sleeved polos, that wouldn’t be apt for cold weather.

The first is the most realistic, as a lot of guys in my business school would wear these pullover jacket-shirt thingies, but it’s not the most attractive thing to make an anime character wear. The second was a more “classic” button up with a sweater. I quickly threw it out. The third is what I went with, something more business casual. It’s a 3/4th quarter-length shirt with a business jacket- it’s nice looking but still somewhat casual.

I typically only do 3 color tests, but for this I did 4 since I couldn’t decide on black/grey/khaki as the base color. Of course, we eventually decided on the first color palette.

After that, I was almost done with designing him- all he needed now was a nice winter coat!

His winter jacket was easy to design. It’s just a black trenchcoat with a warm scarf around his neck.

And there you have it, Edwin’s design from start to finish! Next time I’ll talk about designing Natasha, the ex-swim team member.